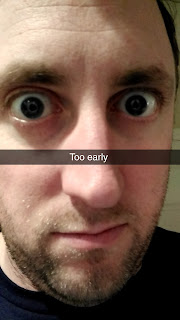 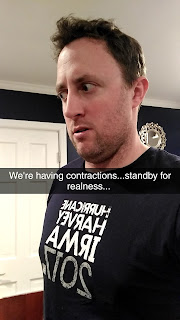 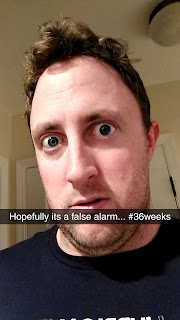 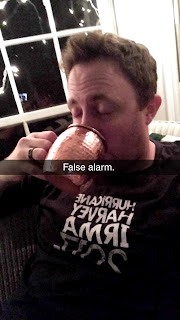 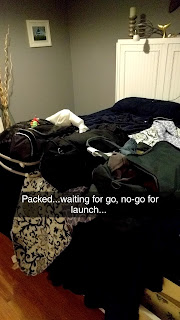 We had a bit of a scare.  Our surrogate sent us a text,
"I need to talk to you two on the phone. Nothing serious, don't freak out. Who's phone is best to call?"
So of course, we start FREAKING out.
We got on the phone with her and she begins explaining to us that she's been having contractions for several hours. They started at 8 minutes apart and are down to 6 minutes apart.  She wouldn't normally be concerned, but since we have to travel to get there in time, she wanted to make sure it wasn't the precursor to labor and was heading to the on-call nurse and OB to make sure.
We were fine with that and the, 'ok this could be go-time,' started.  I got out the spreadsheet to figure out what flights were going to be available when and if we needed to go. Dustin got his go-bag out of his car to get ready to go to the airport if he needed it.
I put the car seat in my car and started putting together my bags and getting baby stuff all packed up and ready to move in the event that we need to. (this might also be a good time to mention that we had JUST made adult beverages and I had taken A SIP before we got the call...so for the duration of this...my drink was just sitting there...)
We were getting updates on snapchat 👻(ryan_dtd) while our surrogate was in the room.

--Baby is fine and heart rate is good. Hooked up and contracting, doctor is going to check hormone levels. Dilated to 1.5cm--

--Doctor said everything is fine. Just an "irritated uterus." I'll have to go back in if water breaks or contractions get worse.--

So we could breathe. I DOWNED that drink. (and may have had a few more just to relax)

I can't believe that happened. Things got super real, SUPER quick.  It really solidified for us where we are in our journey...near the end, and the beginning of another.

Where are we now?  We are holding steady.  We had our second of the weekly appointments this past Wednesday and while Dustin and I were trying to extrapolate the rate of change of the dilation...we thought we'd probably be at 4cm...

--Update time: 1.5cm dilated, “even more effaced” (no percentage). Beastie is head down. HR was 145. My bp is still good.
She changed my appointment next week so I can see her

So no change. Except for a little more effacement, everything is still status quo...well besides the annoying contractions of an irritated uterus. I believe we have started to lose bits of the mucus plug. (that really just sounds gross...couldn't we have come up with a better term than mucus? Well I guess if we did it would still be associated with that bodily fluid and still have a gross connotation...but I digress) We're back to sometime between now and November 24th. With the 24th potentially being the day we induce. But I'm ok with it now. We're in the "full-term" range which means the baby would likely be fine if it was born today. I'm sure it wouldn't have been anything huge if it was born last week, but better to be fully cooked...just not over cooked.
Here's to next week being generally uneventful and a nice drive to the Great White North...Its going to be a big change from when we were there in July! ❄❄